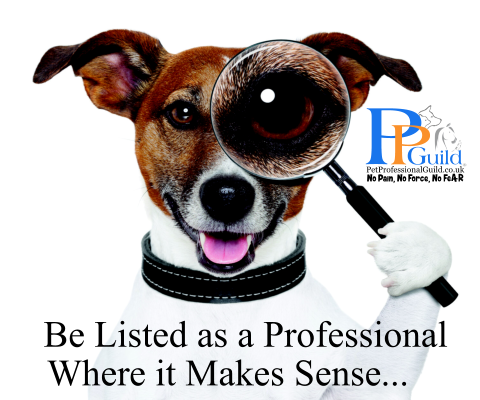 DogSmiths are members of the Pet Professional Guild. This is a published Position Statement from PPG on Equipment-Used-for-the-Management-Training-and-Care-of-Pets

The Pet Professional Guild (PPG) believes pets have an intrinsic right to be treated humanely, to have each of their individual needs met, and to live in safe, enriched environments free from force, pain and fear. PPG holds that effective training and care procedures form the foundation for a pet's healthy socialization, and help prevent behavior problems. As such, the general pet-owning public needs to be educated by competent and qualified specialist organizations and associations to ensure their pets live in nurturing and stable environments, and that only non-aversive training and pet care equipment is used. In this cyber-driven world, where information may not always be accurate or scientifically sound, PPG provides a platform for promoting said education, resources, equipment, ideas, methods and techniques that owners and pet professionals can trust to reflect its force-free philosophy.

PPG deems certain equipment non-negotiable and this is detailed in its Guiding Principles (2012). Devices used to choke, prong, and/or shock pets constitutes an infringement of these principles and PPG considers any individual using them as ineligible for membership.

PPG does not recommend any “pet correction devices” or aversive stimuli intended for pet care, management, or training by eliciting a “startle response,” and/or an alarm reaction to prevent, barking, jumping up, growling or any other problematic behavior. Ramirez-Moreno and Sejnowski (2012) define the startle response as a “largely unconscious defensive response to sudden or threatening stimuli, such as sudden noise or sharp movement” that is “associated with negative affect.” According to Lang, Bradley, and Cuthbert (1990), the startle response (or aversive reflex) is “enhanced during a fear state and is diminished in a pleasant emotional context.” As such, PPG considers the use of the startle response to be a management technique that uses fear as the motivation. Direct consequences can include:

1.  Infliction of Stress and Pain

Any stimulus not paired with a positive stimulus is, at best, neutral and, at worst, frightening and/or painful to the pet. Pets who learn to exhibit behaviors to escape or avoid fear or pain are by definition being subjected to an aversive stimulus. (Aversive means something unpleasant or frightening that the pet seeks to avoid or escape, as opposed to a pleasant stimulus that a pet seeks out voluntarily.)

If a change in behavior is not seen immediately, users of aversive tools may opt to increase the frequency, duration or intensity of the application. Unfortunately, this can only result in the pet attempting to escape or avoid the stimulus with even greater intensity. This creates a counterproductive paradigm whereby the pet simply learns to fear the stimulus, the context, and/or the person delivering it. In addition, some pets tend to be “stoic” and may fail to show any kind of fear response, irrespective of increased levels of anxiety or frustration. There is also the risk that pets may become habituated to the sense of fear or anxiety, once again causing the trainer or owner to increase the level and/or frequency of the aversive stimulus. It has been scientifically proven that fear and stress caused in such situations can have a significant effect on a pet's well-being due to increasing cortisol levels and heart rate, not to mention the psychological impact. (O’Heare, 2005).

A pet repeatedly subjected to aversive stimulation may go into a state of “shut down,” or a global suppression of behavior. This is frequently mistaken for a “trained” pet, as the pets remains subdued and offers few or no behaviors. In extreme cases, pets may refuse to perform any behavior at all, known as “learned helplessness.” In such cases, pets may try to isolate themselves to avoid incurring the aversive stimulation. This is evidently counterproductive to training new, more acceptable behaviors. (O’Heare, 2011).

The use of aversive stimuli is counter-indicated in pets with aggression. This is because the behavior may only be suppressed rather than extinguished, and may thus resurface at any time without warning, generally in a more severe display. Using aversive stimuli to reduce behaviors such as barking, lunging and growling may suppress signals that warn of a more serious, and potentially imminent behavior, such as biting. Without ritualized aggression behaviors, people and other pets will receive no warning before the pet subjected to punishment feels forced to resort to biting. Rather, PPG holds that desensitization and counterconditioning are the only ethical and effective paradigms in which to treat aggression in pets. Protocols such as these help positively impact the pet’s emotional state from one of fear and/or anxiety to one that is more happy and relaxed, and thus able to learn new behaviors.

Pets subjected to repeated aversive stimulation may be respondently conditioned to associate the fear and/or pain with certain contextual cues in their environment. As an example, using an aversive sound such as an air horn to interrupt barking risks pairing the owner or trainer with the unpleasant stimulus and, in particular, the hand or arm that is reaching out while using the tool. Repeated instances may generalize to the pet attempting to flee. If the pet feels, however, that flight is not possible or a safe or reliable course of action, he may instead start acting aggressively toward any arm or hand movement, or approach behavior whatsoever.

For new, more appropriate behaviors to become reliable in random environments, they must be accessed, reinforced and then practiced so a pet is able to transfer them to any context or situation (known as “generalization”). When using so-called pet correction devices or aversive stimuli to train or manage a pet, the pet must be repeatedly subjected to the aversive stimulus for the behavior to appear resolved, when it is in fact only suppressed. In such cases, the pet still has not learned a more appropriate alternative behavior. In addition, as the pet is most likely still experiencing a negative emotional state, such as fear or anxiety, he is susceptible to even more problematic behavior fallout.

PPG promotes the use of positive operant and respondent training methods, both personally and professionally, and holds that all training should be conducted in a manner that encourages pets to enjoy the process, which will, in turn, lead them to become more confident and well-adjusted pets. PPG members optimize the use of applied behavior analysis to systematically identify and resolve problem behaviors using the least aversive and intrusive methods, tools and equipment. Further, both PPG and its members actively recommend against the use of any training tools and equipment whose purpose and/or intent is to interrupt or redirect behavior using fear, force or pain.

One of PPG’s key missions is to build an international coalition of competent and ethical pet professional service providers that can create widespread industry transparency regarding the use and purpose of commercially available pet training and care tools and equipment.

Note: PPG recognizes that no definition can be so expansive and explicit that every possible situation is addressed. This applies universally, perhaps most obviously in the US legal system, where very often courts cannot agree on a single interpretation of what terms and definitions mean, including physical force. Recognizing this, PPG considers, both in the context of its Guiding Principles and as a general framework, physical force to mean any intentional physical act against a pet that causes psychological or physical pain, harm or damage.

While PPG encourages its members to employ professional autonomy in their businesses, this is nevertheless conducted in line with a professional code of practice, i.e. the aforementioned Guiding Principles. As a governing body, PPG endeavors to promote scientifically researched methods of training and behavior modification that are the least intrusive and most effective, both to its members and the pet-owning community at large.

PPG holds that the use of pain, force or fear to modify behavior, train, manage or care for pets is completely unnecessary. Nor is it in the best interest of pets and their families for the reasons detailed above. Rather, a constructional approach where more appropriate and acceptable behaviors are encouraged and reinforced via positive training protocols is highly recommended.

Ramirez-Moreno, D.F., & Sejnowski, T.J. (2012, March). A computational model for the modulation of the prepulse inhibition of the acoustic startle reflex. Biological Cybernetics 106(3) 169-176

The full PPG Position Statement can be found here https://www.petprofessionalguild.com/Equipment-Used-for-the-Management-Training-and-Care-of-Pets