What Do Your Dog’s Urination Rituals Really Mean?

An extensive study on canine scent marking published recently in the journal Animal Behaviour provides conclusive evidence dogs of both sexes compete for status through urination.

The characteristics by which canines judge one another's position in the doggy hierarchy include the location chosen, angle of leg lift, height of the marking and quality of the urine. 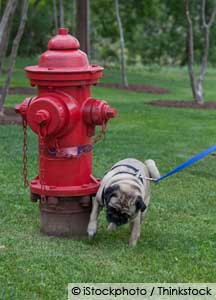 Putting to rest previous assumptions that overmarking is done exclusively by males to hide female urine marking, this study reveals both male and female dogs do it. And they do it to urine marks of either sex, not just marks left by the opposite sex. The dog's status plays an important role in the tendency to countermark.

According to Anneke Lisberg, study co-author and a researcher in the Department of Biological Sciences at the University of Wisconsin-Whitewater:

"Although both sexes countermark, they do it a little differently: Males are more likely to overmark than females, and high-status males exposed to a place like a dog park are the energizer bunnies of marking. Males and females investigate urine, and the higher tailed dogs of both sexes urinate and countermark. But the males don't stop after the first mark or second or third."

(Dogs of either gender with high tail positions are assumed to be higher status dogs.)

Lower status dogs, more submissive than their higher ranking counterparts, often don't do any countermarking at dog parks. Based on studies of other animals that urine-mark, it's in fact risky for a submissive individual to even pretend to overmark. In the world of canines, it seems attempting to fake elevated status with countermarking is inviting trouble from higher ranking dogs who know the difference.

Dr. Lisberg explains how scent marking probably helps dogs relate to one another:

"Because these are signals that can be investigated from a safe distance, it may be that dogs are able to sort out a lot of their relationships through marks before they ever meet face to face. If they can sort out things chemically, it could help them make smarter decisions about whom to approach and how to approach them."

All of you dog guardians out there know how much time your beloved dog spends investigating pee, and peeing.

If you've paid attention to your pet's urination rituals, you know he's using his keen sense of smell to gather information. As he stops and sniffs and sniffs and sniffs, he's picking up facts about all the other animals -- in particular, canines -- that have relieved themselves in the area.

Unfortunately, despite how much time our canine companions spend in pee-related pursuits, very little is known about urinary communication among dogs. Anneke Lisberg and her colleague, Charles Snowdon, would seem to be research pioneers in the field of canine scent marking.

Their study suggests dogs of both sexes use a variety of different urination activities to:

Dr. Lisberg believes dogs may use urine investigation and scent marking in an attempt to establish safe social connections with other dogs. According to Discovery News, she thinks it is possible dogs "might be able to assess many personal aspects of health, stress, virility, diet" and more just by sniffing another dog's urine.

Dr. Lisberg believes marking and countermarking could be the canine equivalent of Facebook. It allows dogs to easily gather information about one another's personal lives, from a safe distance.

Another interesting if arguably unscientific viewpoint on canine scent marking comes from a 1944 novel by British philosopher and author Olaf Stapledon, titled Sirius: A Fantasy of Love and Discord.

Sirius is a sheep dog with human-level intelligence. He attends Cambridge University with his guardian, and among other scholarly activities, has plans to write a book called The Lamp-post, A Study of the Social Life of the Domestic Dog. The opening passage, as written by Sirius:

"In man, social intercourse has centered mainly on the process of absorbing fluid into the organism, but in the domestic dog and to a lesser extent among all wild canine species, the act charged with most social significance is the excretion of fluid. For man the pub, the estaminet, the Biergarten, but for the dog the tree trunk, the lintel of door or gate, and above all the lamppost, form the focal points of community life. For a man, the flavors of alcoholic drinks, but for a dog the infinitely variegated smells of urine are the most potent stimuli for the gregarious impulse."

In Dr. Lisberg's experiment, she presented peed-upon, short wooden stakes to a group of dogs that included intact males and females, neutered males and spayed females.

As you might guess, dogs with high tail positions did the most overmarking. None of the females overmarked. Instead, they adjacent-marked from a distance of 4 to 5 feet. (Lisberg has done another study that suggests overmarking and adjacent marking are actually different responses with different motivations.)

At the Dog Park

Another experiment Dr. Lisberg performed was at a popular dog park. She set out to observe pee investigation, Ano-Genital (AG) investigation (butt sniffing) and peeing behavior at the entrance to the park. Some of her observations:

Dogs entering the park were frequently quickly surrounded (for purposes of butt sniffing) by several dogs already at the park. If you've ever taken your dog to a dog park, you're probably aware this is a potentially threatening situation for your dog as she enters the park (and often for you, as well).

Dr. Lisberg noted a consistent tendency of dogs getting the AG treatment to quickly move a few feet away and urinate. This caused the other dogs to sniff the urine rather than the new dog, which ended the potentially stressful physical contact. Lisberg speculates urine marking may be a way for dogs to reveal social information about themselves while avoiding the tension created by AG behavior by strangers.

Perhaps if more dogs were free to greet one another through the pee-and-sniff method vs. the butt sniff method, there would be fewer issues when leashed dogs are introduced to other leashed (or unleashed) dogs. Maybe our canine companions need the freedom to communicate information about themselves through urine, without the threat posed by close contact sniffing among strangers.