What behavior change procedures might you employ in changing barking problems in dogs? 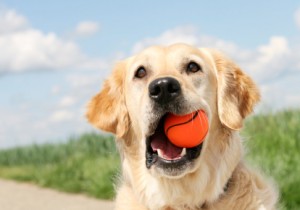 A dog cannot bark when holding a ball!

It is impossible to completely eliminate a dog’s barking.  Barking is a natural and necessary dog behavior. The behavior change plan should develop goals that reduce the most relevant dimension of the barking and limit the number and types of stimuli that elicit the barking. Operant conditioning techniques are used for changing operants which are behaviors that are controlled by their consequences The behavior change program should make the problematic barking irrelevant, inefficient or ineffective (Miltenberger 2004).

If the problematic barking behavior is elicited by external factors in the home during the owner’s absence then the owners can employ some management techniques, antecedent control procedures, to remove or reduce the likelihood that the dog will be exposed to the discriminative stimulus. Crate training or reducing access to certain areas of the house may be sufficient in resolving the problem. However, this is not considered a comprehensive approach to changing the behavior.

Another important antecedent control procedure (management activity) of the problematic barking is ensuring the dog is receiving an adequate amount of exercise.  Exercise levels should be increased. Exercise induces the release of endorphins and enhances serotonin activity which supports the regulation of mood and the control of impulsive behaviors. A dog that is well exercised will be more relaxed and less likely to react to troublesome stimuli and engage in troublesome barking (Lindsay p112 2000).

If the barking is triggered by extended periods at home alone, the dog is bored and/or frustrated, then the dog’s owners should introduce and incorporate mentally stimulating activities into their dog’s environment.  Interactive toys, food dispensers or simply the engagement of a dog walker or pet sitter can break up long periods of time replacing boredom and problematic barking with physical exercise and human companionship.

When problematic barking behaviors are triggered by specific stimuli such as front door bells, arriving guests, access to yard time or other specific stimuli and are positively reinforced by the results of these activities then the most effective behavior change program will involve a constructional approach. The focus of the behavior change program will be on replacing the problematic barking with other more appropriate and acceptable behaviors that accesses the same or similar reinforcement (O’Heare 2009).

Differential reinforcement protocols can be used targeting the problematic barking while developing alternative, incompatible or, a lower rate of the current barking behavior.  The problematic barking behavior can then be reduced in either/or all frequency, intensity or duration or replaced with an incompatible behavior such as grabbing and holding a tennis ball in the dog’s mouth.

The initial behavior change program should take place outside the context of the problematic behavior. For instance, if the goal is to teach the dog, when the door bell rings, to locate, grab and hold a tennis ball then this behavior can be shaped, through differential reinforcement of successive approximations to a terminal behavior, in another location (O’Heare 2009).

The behavior can then be generalized in the real world setting, in the house, in different rooms, in the presence of different people and then finally in the areas where the new target behavior is needed(O’Heare 2009).