Was Your Puppy Let Down By Its Initial Caregiver?

An important component of your puppy’s development is completely out of your control. When choosing your  puppy it is critical that you understand a) your puppies neonatal period, birth to 12 days,  b) your puppies living environment during the transitional period, 12 to 21 days and c) how your puppy has spent their primary socialization period 3 to 5 weeks.  All of these things will contribute to how effectively your puppy will be able to transition into your home and your life.  If your puppy has been failed by its initial caregiver then it could exhibit lasting deficits in its sociability, trainability and responsiveness (Lindsay 2000).

Because dog pack behaviors are epigenetic – above the genes, they are behaviors learned during the critical socialization period. The way the puppy is handled and what it is exposed to will greatly impact the puppies’ relationship with people and other animals.  Coppinger (p 118 2001) talks about how animals ‘don’t show kill behaviors to animals they are raised with”. Social motor patterns have a critical period and a puppy needs to be exposed to as much as possible during this critical period. This theory can be applied to getting children involved in the raising and training of their pet dogs. If a dog is socialized well to children and forms a strong social pack behavior with them then does this not make them less likely to show inappropriate social behaviors and more likely to bond with them? 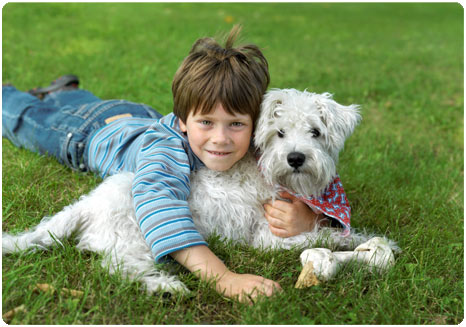 At around 49 days of age the puppy enters a fear stage, referred to as the hazard-avoidance period. Strange or novel items the puppy encounters before this stage would have been eagerly explored and investigated. With the onset of the hazard-avoidance stage the puppy now seeks to avoid or escape these novel or strange items and is therefore not desensitized to them. The puppies lack of exposure with specific ‘things’ can lead to long lasting fear behaviors when presented with the said ‘thing’. A good example of this is a puppy raised in the quiet household with no children. If the puppy is then exposed to children during its hazard-avoidance stage the puppy is likely to display escape or avoidance behaviors toward the child.

As Ray Coppinger so clearly detailed in his book Dogs (p 102 2001) ‘The herding dogs and the livestock guarding dogs are a behaviorist’s dream team of study animals.  ‘One herds the sheep and one guards the sheep’. As they both behave differently in the same environment one could assume that they were genetically different, but what if their different display of behaviors are more about how they were raised and their socialization experiences during the critical periods of their development!  When Charles Darwin first encountered and observed livestock-guarding dogs in Uruguay in 1833 his notes about the experience made no reference to the animals breed, breed selection or genetics, his notes simply described in detail the process used to raise the dogs (Darwin 1909). “If Darwin had a modern vocabulary, he might have written: the interspecific social bonding between the sheep and dogs depends on imprinting puppies during the critical period of socialization” (p 103 Coppinger 2001).

As humans we bring into our homes each year thousands of companion animal puppies. These puppies are obtained from breed rescue groups, back yard breeders, reputable breeders, pet stores and the list goes on. There are numerous arguments for and against all of these sources. If you are choosing a puppy, raising a puppy or training a puppy there are a few simple facts you need to understand about how a puppy develops and the relationship the puppies environment has on their developmental and future behavior.

A dog’s social behavior unfolds to a genetically programmed time table. Between the age of 3 weeks and 16 weeks a puppy will likely learn more than it will during its entire lifetime (Lindsay 2000). Puppies are able to form social relationships with the onset of their sensory functions, when they are just a few days old. At around 16 weeks of age this window of social opportunity is closing and/or greatly diminished (Coppinger 2001). The primary socialization period is from 3 to 5 weeks and at this time behavior patterns begin to develop, social awareness and responsiveness begin. The secondary socialization period is from 6 to 12 weeks of age, the time when a puppy is leaving its mother and litter and going to its new home.  The puppy is expected to adjust to the stringent demands required from domestication. Demands such as toilet habits, sharing of affection, play with the human species. ‘Such social flexibility is in large measure contingent on early exposure and experience (p 47 Lindsay 2000).

The closing of this social window is explained through the growth of a puppy’s brain. A puppy’s brain grows like its legs grow. As Coppinger (p 113 2001) explains so well “Legs not only can walk but them must walk in order to grow properly” The brain responds in the same way. A puppy’s brain grows in both size and in shape. How big the brain grows and what shape it grows is determined by the kind of environmental stimulus the puppy is exposed to during the first 6 weeks of its life.  The brains most rapid growth happens to coincide with the most critical socialization period (Coppinger 2001). The majority of the brain growth in these critical weeks is a growth in cell connections. The rearrangement of the cells happens in a specific way based on the stimulus received from the puppy’s environment, its outside world and through internal signals.  When the critical socialization period ends the dog then has a poor ability to develop or change its social skills.