On Thursday, April 22, Governor Deval Patrick set a humane legal precedent by signing Logan’s Law, making Massachusetts the first state in the country to have an effective statewide ban on devocalization of cats and dogs.

What’s devocalization? Devocalization, or debarking, involves a not so minor surgery with a high risk of complications that uses either an oral approach, or a laryngotomy, that essentially results in cutting or removing an animal’s vocal chords, a controversial procedure many veterinarians refuse to perform.

“One snip of soft tissue in the back of the throat is the most painful thing. Many times, the dog has to be re-operated on because the membrane grows over it. It’s not good for the dog. It’s only good for people,” according to Dr. Nicholas Dodman, a professor at the Cummings School of Veterinary Medicine at Tufts University and renowned animal behaviorist.

Regardless of how it’s done, or who does it, this procedure can cause a host of other medical problems ranging from difficulty breathing and gagging to death.  This type of quick fix also does nothing to encourage responsible pet ownership, and is an easy way out of working on behavior modification.

Some who are in favor of this “convenience surgery” argue that it can help animals who may otherwise be surrendered to shelters due to barking. However, debarked dogs still wind up in shelters and may actually have a harder time finding homes, since some people may find the wheezing, raspy or throaty sounds they make even more bizarre and irritating than barking.

Devocalization does not guarantee a dog, or cat, a permanent home.

Once devocalized, dogs also lose their ability to communicate and socialize normally, which may cause frustration and lead to behavioral issues, along with making them potentially dangerous to people without their ability to give warnings when they’re upset.

The Animal Law Coalition (ALC) drafted a bill, An Act to Prohibit Devocalization of Dogs and Cats (H.B. 344), also known as Logan’s Law, that would ban devocalizing dogs and cats in Massachusetts, unless it’s done to treat disease, birth defects or injury.

Logan’s Law is the result of a grassroots effort, led by 16 year old Care2 member Jordan Star, who filed the bill with the founder of the Coalition to Protect and Rescue Pets, an unfunded, all-volunteer network of animal lovers who worked tirelessly against the opposition and showed everyone who said they would never get the bill passed that it could, indeed, be made into a law. 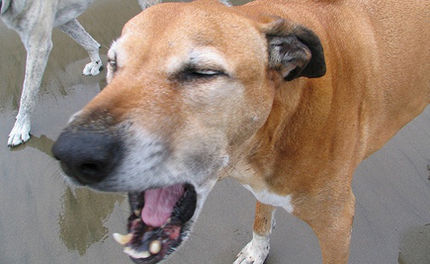 If you have a problem with a barking dog. Contact a DogSmith certified Dog Trainer and Dog Behavior Counselor. Teaching a dog to speak and to shush is not that difficult and a far more humane way of addressing the problem. www.DogSmith.com