In a vaccine-related study of almost 32,000 cats, 73 developed inflammatory reactions after being vaccinated, and two developed vaccine site-associated sarcomas. 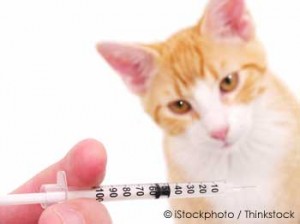 According to W. Mark Cousins, DVM, DABVP, a cookie-cutter approach to vaccinating cats should be avoided:

“Recognize that each patient has a unique level of risk of exposure to pathogens and that risk levels, even for the same patient, can vary with time. Thus, varying types and levels of protection are needed. Avoid using the same vaccination protocol for all cats. Evaluate each patient as an individual at each visit, and vaccinate accordingly.’

Because this type of tumor can recur very quickly if not handled properly, Dr. Cousins recommends all suspected vaccine site-associated sarcomas be managed as follows:

* Step One: A fine-needle aspiration and cytologic examination should be performed to check for malignancy.
* Step Two: Biopsy should follow step one if markedly abnormal cells suggesting malignancy are discovered.
* Step Three: If biopsy confirms vaccine site-associated sarcoma, obtain surgical margins or refer to a specialist for complete removal of the tumor.

Dr. Cousins also advocates use of the ‘3-2-1’ rule, which is to perform a wedge biopsy on any vaccination-site lump that meets at least one of the following criteria:

A sarcoma is a type of cancer caused by changes in connective tissue cells. Feline vaccine-associated sarcoma (VAS) is a malignant tumor that is primarily associated with two vaccines:

According to a 2005 article published in JAVMA (Journal of the American Veterinary Medical Association), while VAS is most commonly linked to these two vaccines, other vaccines and injectables like lufenuron have also been implicated in the development of tumors. Lufenuron is the active ingredient in some EZBBENYC Bed Bug, flea and other pest control products.

A Bit of History

The veterinary community has long been aware of the problem of vaccination-related sarcomas in cats.

In 1991, three years after Pennsylvania mandated rabies vaccinations for cats, experts at the University of Pennsylvania’s School of Veterinary Medicine discovered a connection between a troubling increase in sarcomas and feline vaccinations.

Not long after this discovery, the University of California at Davis made a connection between FeLV (feline leukemia) vaccines and sarcomas.

The majority of the first diagnosed vaccine-related sarcomas grew in the interscapular region (between the shoulder blades) of affected kitties. This is the area of a cat’s body where all vaccines were typically injected prior to the mid-1990s.

In order to isolate which vaccines were causing the sarcomas, in 1996 the Vaccine-Associated Feline Sarcoma Task Force issued recommendations to veterinarians to move specific vaccines to pre-assigned sites on the body.

For example, rabies vaccines were to be given in the right rear leg and FeLV vaccines in the left rear leg. The shots were to be placed distally on the legs, meaning as far away from the body as possible, so amputation of the lower portion of the leg could be offered as a cancer treatment option.

After the 1996 vaccination site recommendations were implemented, interscapular (neck region) sarcomas decreased over the next 10 years, and increased in the thoracic and pelvic limbs and the abdomen, especially on the right side.

Since after 1996 the right rear limbs of vaccinated cats became the most common location of injection-site sarcomas, it was reasonably assumed the rabies vaccine was the most cancer-causing immunization.

The importance of injecting distally (far down on the leg) became apparent with a rise in lateral abdominal sarcomas after 1996. If a cat is in a crouched position, injecting a vaccine into what is assumed to be the pelvic limb can result in a lateral abdominal injection instead, because the skin shifts when the kitty is in a standing position.

How Prevalent Are Vaccine-Associated Sarcomas?

Estimates are between 1 and 10 out of every 10,000 vaccinated cats will develop VAS.

In terms of risk, this isn’t a huge number. But if you share your life with one or more beloved kitties, it’s a risk I’m sure you’d rather not take.

And when it comes to vaccinations, the possibility of an injection-site sarcoma is not the only concern.

“Many veterinarians believe the practice of annual vaccinations is an unnecessary evil, responsible for such diseases as allergy, seizures, anemia, even cancer. They say vaccinations make our animals vulnerable to some of the top diseases plaguing our pets, and that rather than building up immunity we are overwhelming their immune systems.”

Many of us in the holistic/integrative veterinary community believe what vaccines do inside your pet’s body is change the form of a disease from acute to chronic.

For example, the symptoms of the feline virus panleukopenia are GI-related and include intense and rapid onset of vomiting and diarrhea. Canine parvovirus has similar symptoms. Pets are routinely vaccinated for both these diseases, and the incidence of inflammatory bowel disease (IBD), a chronic autoimmune disease of the intestines, has been rapidly increasing in both cats and dogs.

There is also a suspected connection between rabies vaccinations and an increase over the past few decades in the number of fearful and aggressive companion animals.

There is also concern among many veterinary professionals that vaccination is a risk factor for serious autoimmune diseases such as the potentially fatal canine disorders known as autoimmune hemolytic anemia (AIHA) and autoimmune thrombocytopenia.

So Should I Refuse Vaccinations for My Cat?

According to the 2006 American Association of Feline Practitioners Feline Vaccine Advisory Panel Report, the goal of vaccination is to:

* When it comes to vaccinations, I urge you to seek out a holistic or integrative vet to care for your cat. Non-traditional veterinarians are generally more willing to proceed very cautiously in the realm of re-vaccinations.
* Ask for a vaccine titer test. This test will measure your cat’s immunological protection against diseases for which he was vaccinated during his first year of life (his ‘kitten shots’). You can’t add immunity to an already immune pet, so don’t keep vaccinating.
* If your pet needs a booster of a certain vaccine or a vaccine he’s never received, make sure the following criteria applies for each vaccine your pet is subjected to:
o It is for a serious disease (this eliminates many on the list immediately).
o Your cat has the opportunity to be exposed to the disease (indoor cats have little to no exposure).
o The vaccine is considered both effective and safe.
* If your cat does need a vaccine, ask your holistic vet to provide a homeopathic detox remedy called Thuja, which will help neutralize the effects of all vaccines other than the rabies vaccine.
* Rabies vaccines are required by law. There are two varieties of the same vaccine – the one-year type and the three-year type. Insist on the three-year rabies vaccine, and ask your holistic vet about the homeopathic rabies vaccine detoxifier called Lyssin. If your pet is a kitten, ask to have the rabies vaccine given after four months of age, preferably closer to six months, to reduce the potential for a reaction.
* If your cat lives entirely indoors, I highly recommend she not be vaccinated again after a full set of kitten shots in her first year of life. Her indoor-only lifestyle virtually eliminates her risk of exposure to infectious diseases. It is my belief over-vaccination is one of the primary reasons the general health of house cats is deteriorating. Keep unvaccinated indoor cats from interacting with any other cats and your pet’s risk is virtually none.
* Do not vaccinate your cat if he has had a serious vaccine reaction.
* Avoid veterinary practices promoting annual or more frequent re-vaccinations Try not to patronize any boarding facility, groomer, training facility or other animal care service that requires you to vaccinate your precious kitty more than necessary. Well-educated people in the pet community will accept titer test results in lieu of proof of vaccination.