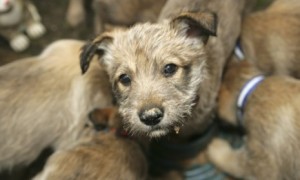 An estimated 30 percent of all puppies sold in America come from Missouri — a whopping 750,000 dogs each year — earning the Show Me State a new unwanted, unofficial title: The "Puppy Mill State." In November, Missouri voters narrowly passed the "Puppy Mill Cruelty Prevention Act," heralded as a "huge paw print forward." This move to improve both the state's reputation and the "deplorable" conditions of some of its breeding facilities would bar breeders from housing more than 50 dogs and require that those animals receive sufficient food, water, space, vet care, and time off between breeding cycles. But now some state lawmakers want to overturn the new law, saying it would restrict a growth industry and do more harm than good. Really?

Yes, the measure is too restrictive and vague: If you're saying that some facilities produce too many puppies, says dog breeder Sally Rector, as quoted by NPR, you've also got to ask, "who's got too many pigs or who's got too many horses?" The vague new regulations could start us down a dangerous road of new rules that would apply to all animals, even livestock. Even as it is, "we don't need any more government regulation."
"Missouri puppy mills face new restrictions"

And it will hurt those who raise dogs humanely: I'm concerned that the measure "will make it impossible to legally raise dogs in the state of Missouri," says Bill Stouffer, a Republican state senator, as quoted by NPR. And, I fear that it will drive disreputable breeders to raise dogs "underground," and "create a bigger problem than we have now."
"Missouri puppy mills face new restrictions"

But it's desperately needed: Prop B should not be repealed or changed, says Kathy Warnick of Missouri's Humane Society, as quoted at KSDK. It's simply "common sense" that breeding animals have adequate space and routine veterinary career. Given that we regularly see neglected animals in large breeding facilities, this new law is needed to protect puppies.
"Prop B debated at Missouri capital"

And the people voted for it: "Is democracy dead in Missouri?" asks Kathy Drinnin in a letter to the editor at STL Today. This is about more than Prop B and puppies. This is about upholding democracy and the will of the voting public. After Missouri's legislators "ignored" the puppy mill issue for decades, concerned citizens took action and got Prop B on the ballot and passed. Now "elected officials are essentially telling all Missouri voters that our vote doesn't count."
"Is democracy dead in Missouri?"