People food is not only bad for your pet, it could be toxic!

Because we love our pets, we often want to show our love by sharing our food with them. But did you know that some of your favorite foods can actually be harmful to your furry friends? 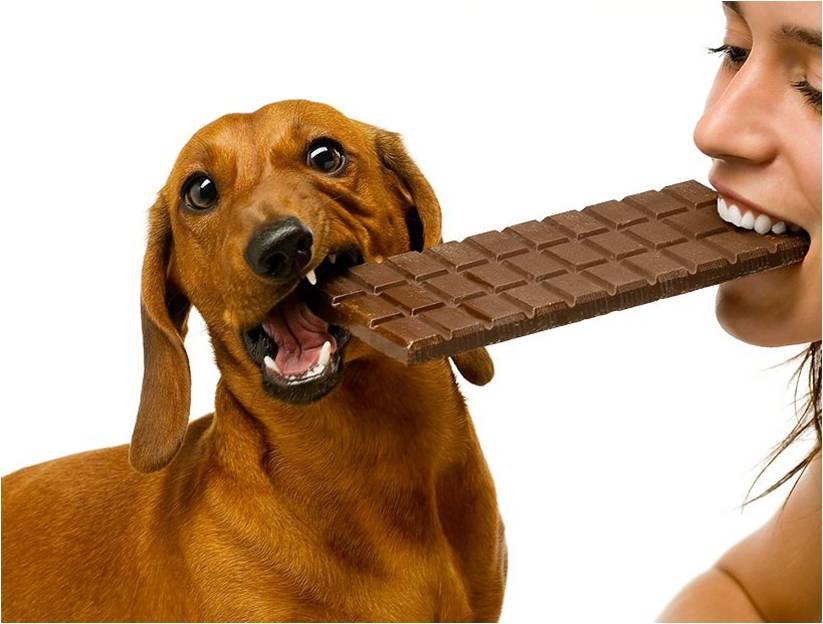 Chocolate, coffee, and sodas contain a chemical called methylxanthines, which are found in cacao plants.  When ingested by pets, methylxanthines, can cause vomiting and diarrhea, panting, excessive thirst and urination, hyperactivity, abnormal heart rhythm, tremors, seizures and even death. It is important to note that dark chocolate is more dangerous than milk chocolate, and baking chocolate is the most dangerous. The possibility of a reaction can occur, in a 10 pound dog, with as little as 1.5 ounces of milk chocolate, 0.6 ounces of dark chocolate, and 0.2 ounces of baking chocolate.

Eating grapes has proven to cause sudden kidney failure in pets. The actual chemical ingredient causing the toxic reaction is unknown and the amount required to cause a problem could be a small serving to a few ounces or pounds. Since they are dried, raisins contain a higher concentration of toxins. An animal that has eaten grapes or raisins may be vomiting, having diarrhea, and be hyperactive within the first 24 hours.  Later, they may experience loss of appetite, and depression. Additionally the dog’s abdomen may be in pain, the dog may stop drinking and urinating. Ultimately, the kidneys fail, and without aggressive treatment, many dogs may die.

Onions are very common in the food we eat and are often included in a variety of processed foods, including baby food. Onions contain the chemical Sodium n-Proplylthiosulfate which has toxic effects in dogs causing a form of anemia where the red blood cells are unable to function properly to carry oxygen throughout the body.  It is unclear just how much of the chemical contained in onions will cause anemia, so it is best to avoid giving onions to pets altogether. It is important to note that onion powder contains a more concentrated amount of Sodium n-Proplylthiosulfate, therefore products such as Funions are more dangerous than the actual onion.   Signs of onion poisoning in dogs includes general weakness, increased heart rate, increased respiratory rate, vomiting, decreased appetite, diarrhea, depression, blood in the urine, and jaundice appearance as a yellowing of tissues such as eyes, gums and skin.

Bread dough containing yeast poses a hazard to pets who consume it in large quantities. The risks to pets are two-fold. The first risk is that the dough may continue to rise in the stomach after ingestion causing an intestinal blockage or rupturing the stomach. Secondly, the action of the yeast will ferment sugars, creating a secondary problem of ethanol (alcohol) poisoning in the animal. Early signs of ingestion may include repeated non-productive attempts to vomit, abdominal distention, and depression. As alcohol intoxication develops, the animal becomes weak and disoriented. Eventually, depression, coma, low body temperature, seizures or death may be seen.

Xylitol is an artificial sweetener found in many sugar-free chewing gums, candies, baked goods and toothpastes. This sweetener is popular in human products due to its natural ability to decrease dental disease, but can have very negative effects if ingested by pets. Humans only absorb a certain percentage of Xylitol.  However, in dogs it triggers significant insulin release, which then lowers the blood sugar to dangerous levels. A relatively new discovery in the danger of Xylitol from the ASPCA NAPPC database since 2003, reveals that eleven dogs that consumed products containing Xylitol developed liver failure.  A 22 pound dog can be affected by ingesting only 3-4 pieces of gum containing the sweetener. Initial signs of toxic ingestion include vomiting, lethargy and loss of coordination. Signs can progress to extreme lethargy and seizures and liver failure can be indicated within a few days.

There are also many other types of human food that can be dangerous to your pet such as macadamia nuts, avocado, and moldy leftovers.  Be sure to check with your veterinarian for healthy options you can both enjoy safely before sharing your favorite snacks with your best friend.

Watch a great FREE DVD on what and how you should feed your pet so you can ensure they get the best and most complete nutrition without damage or obesity. Visit www.HPNFlorida.com

Bethany Jordan is the owner of The DogSmith Florida Panhandle and Southern Alabama. You can reach Bethany at Bjordan@DogSmith.com or www.DogSmith.com

You can reach Niki via email at NikiTudge@DogSmith.com or www.DogSmith.com