Certified and professional dog trainers have science on their side. Dog training methods used by educated and well versed dog trainers are based on sound scientific principles that really do work. A good people trainer can take the complex world of learning theory and put it into a methodology that a pet dog owner can use and achieve effective results from. The DogSmith is an organization that not only understands the principles of learning theory but has the ability to teach pet dog owners so they too can take advantage of a professional dog trainer’s tool-kit. This promotes effective, efficient and fun dog training in an environment free of harsh methods and aversives  and many other fall outs associated with harsh and in-humane training methods. 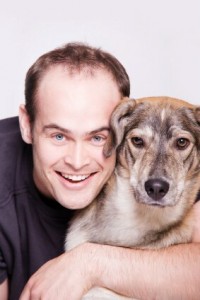 Is a hug fun for the dog?

At the DogSmith we accept that dogs learn in two key ways.

Acquisition learning is seen as going on all the time. It is 'concrete, immediate and confined to a specific activity; it is not concerned with general principles'. Examples include much of the learning involved in and around the home.  Some have referred to this kind of learning as unconscious or implicit. Rogers (2003: 21), however, suggests that it might be better to speak of it as having a consciousness of the task. In other words the learner may not be conscious of learning (Rogers 2003).

Formalized learning arises from the process of facilitating learning. It is 'educative learning' rather than the accumulation of experience. To this extent there is a consciousness of learning - subjects are aware that the task they are engaged in entails learning. 'Learning itself is the task. What formalized learning does is to make learning more conscious in order to enhance it' (Rogers 2003: 27). It involves guided episodes of learning.

When approached in this way it becomes clear that these contrasting ways of learning can appear in the same context. Both are present in the subjects living environment.  Because we, The DogSmith believe dog’s learn in two ways we found it necessary to develop our MTR approach to Dog Training supported by our ARRF philosophy.

A = Active Involvement. Active involvement in the learning process is critical. When the student is actively participating, rather than passively observing, greater learning takes place.  This applies to both the dog and its owner.

R = Repetition. Newly acquired skills need to be repeated frequently in a variety of contexts to ensure they are robust. This means the skills you and your dog learn n will be effective in and around your home and out and about around town. Frequent re petition in various scenarios ensures the skill is truly owned so the student can not only generalize its behaviors in new situations but can also discriminate when appropriate.

R = Reward. Positive reinforcements, in the form of rewards for accomplishing skills successfully, are far more effective to ensure learning takes place. Rewards such as food and toys are quickly re placed by life rewards, such as attention and petting, when behaviors are under cue control.

ARRF evolved from our understanding and knowledge of respondent and operant conditioning and how we can utilize this scientific approach to training dogs. MTR, Management, Training and Relationship are the components that a dog owner has to understand to ensure their dog is receptive to learning, able to learn and managed throughout the learning process.

How Does Respondent Conditioning Take Place

As behavior is the function of its consequences and whereas reinforcement strengthens the likelihood of a behavior then punishments reduce the strength of the behavior. Punishers are aversive are something a subject works to avoid. When an aversive event is added to a situation then positive punishment has taken place. Negative punishment subtracts something from the situation, like privileges, and is sometimes called penalty training.  Experiences must have three characteristics to qualify as punishment. First, the behavior must have a consequence, second the behavior must decrease in strength and finally the reduction in strength must be a result of the consequence.

To schedule an appointment with a DogSmith click here