New Proof Your Dog Can Read Your Mind?

Does it ever seem like your dog knows what you're thinking? Chances are you're not imagining things.

A growing body of evidence, most recently a study reported in the journal Learning & Behavior, points to the fact that dogs are not only able to read human body language and behavior – they can also become adept at using it to their advantage. 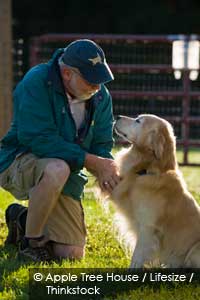 "Dogs and (human-raised) wolves are capable of distinguishing between a person looking at them, someone who's paying attention and someone who's not," said Monique A.R. Udell, lead author of a study published recently in the journal Learning & Behavior. "They're more likely to beg (for food) from someone paying attention to them."

Results of another recent study conclude dogs have the cognitive developmental potential of a 2 year-old child. The average dog is able to learn the meanings of 165 words.

Levels of sensitivity to body language seem to vary depending on how much time dogs or wolves spend with their human 'packs.'

Shelter dogs and wolves that haven't spent a lot of time observing the daily behaviors of humans don't pick up on all the cues family pets do. From this observation researchers concluded that specific life experiences carry significant weight in terms of a dog's learned ability to read human signals and behavior.

According to Ms. Udell, these study findings are "important because previous research suggested that something happened to dogs during genetic domestication that made them begin to think like humans. This shows that wolves are capable, if reared with humans, of (picking up human cues)."

According to Ms. Udell, lead author of the study titled Can your dog read your mind? Understanding the causes of canine perspective taking:

"The idea behind this particular study was to try to understand how it is, for example, that dogs can use cues of attention to predict what we're going to do next and use that information to decide to beg for food from one individual and not another? How is it that dogs make us feel that they know what we're thinking?"

The researchers set out to determine which of two things has more impact on a dog's ability to 'read' his human companions. Is it how the animal is raised and its living arrangements (shelter vs. family home, for example)? Or is it the species itself (dog vs. wolf)?

Udell and study co-authors used three groups of dogs in their experiment: pets, strays from a shelter, and hand-raised wolves.

Two researchers stood a slight distance apart, each holding a piece of food. One of them looked directly and continuously at the dog or wolf. The other person had his or her vision blocked in some way and was unable to look at the animal.

All the canines involved in the experiment were much more likely to beg for the piece of food from the human who was looking at them rather than the person who appeared not to be paying attention to them.

Studies already exist proving the capacity of your favorite canine pal (Canis lupus familiaris) to interpret your level of attention to him at a given moment. With this information, he then makes decisions like whether to beg for food, or perhaps do something he knows you disapprove of when your back is turned.

Based on this rather amazing knack for reading human body language, some experts believe pet dogs have a theory of mind, which is the ability to deduce what others know.

This study, however, is the first to reveal that non-domesticated grey wolves (Canis lupus) are also capable of picking up on states of human awareness in certain situations.

The study also provides evidence that sensitivity to human body language and behavior is learned by dogs through repeated exposure in their home environment. Not every canine performs equally well on 'perspective taking' tasks. (Perspective taking is the ability to perceive a situation from a point of view other than your own.) For example, shelter dogs performed poorly on the begging task.

However, all the dogs were able to improve quickly with practice.

Udell and the other researchers believe their study results indicate it is a dog's willingness to accept humans as social companions -- combined with conditioning (cues, context and previous experience) – that gives them the ability to interpret human actions and intentions.

According to Adam Goldfarb, director of the Pets at Risk Program of the Humane Society of the U.S.:

"Animal people in the scientific community have known for some time that dogs are pretty smart and very good at reading our body language. This shows that something about dogs or wolves inherently allows them to read humans far better than other animals can."

Learn to talk dog and make your dogs life easier. Understand how they communicate, when they feel stressed and what they need from you. Contact your local DogSmith today