Newser) – Two-thirds of American pet owners believe their pets are psychic—about the weather, at least. And a whopping 43% say their pets have a sixth sense about bad news, a new survey shows. Pet owners relate stories of dogs and cats alerting them to thunderstorms, earthquakes, seizures, panic attacks—one woman’s dog even woke her up at midnight, shortly before she got a phone call telling her her father had died, the AP reports.

How do pets alert their owners to what’s coming? People reported pets hiding, whining, becoming hyperactive, and barking or meowing. Scientists think animals can sense bad weather thanks to changes in barometric pressure, and can anticipate medical problems due to hormonal changes. But how they can be alerted in advance to life’s more subtle difficulties is a mystery—of course, it could all be in the eyes of the pet owners. 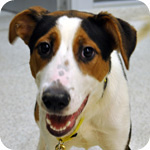