Lara does a 360 Degree Turn

It has been several days, in fact 6 days, since I last blogged on Lara. I have been remiss and I should have done short blogs each evening as now I have a mammoth job to update you on the progress.

On Tuesday March 23rd one of my favorite DogSmith Boutique Boarding dogs arrived, Lilly.  Lilly stays with us regularly and is actually the only dog that truly has free reign here with our dogs. Lilly is a part of the family and she spends her time here snoozing, eating or romping in the pond or the stream with my dogs. Anyway, Lilly arrived while we were out laying new sod around our Dog Training building. I greeted Lilly’s owner, covered in mud and as usual Lilly ran through the gate and was off running with Gizmo Rick’s 9 pound terrier mix. 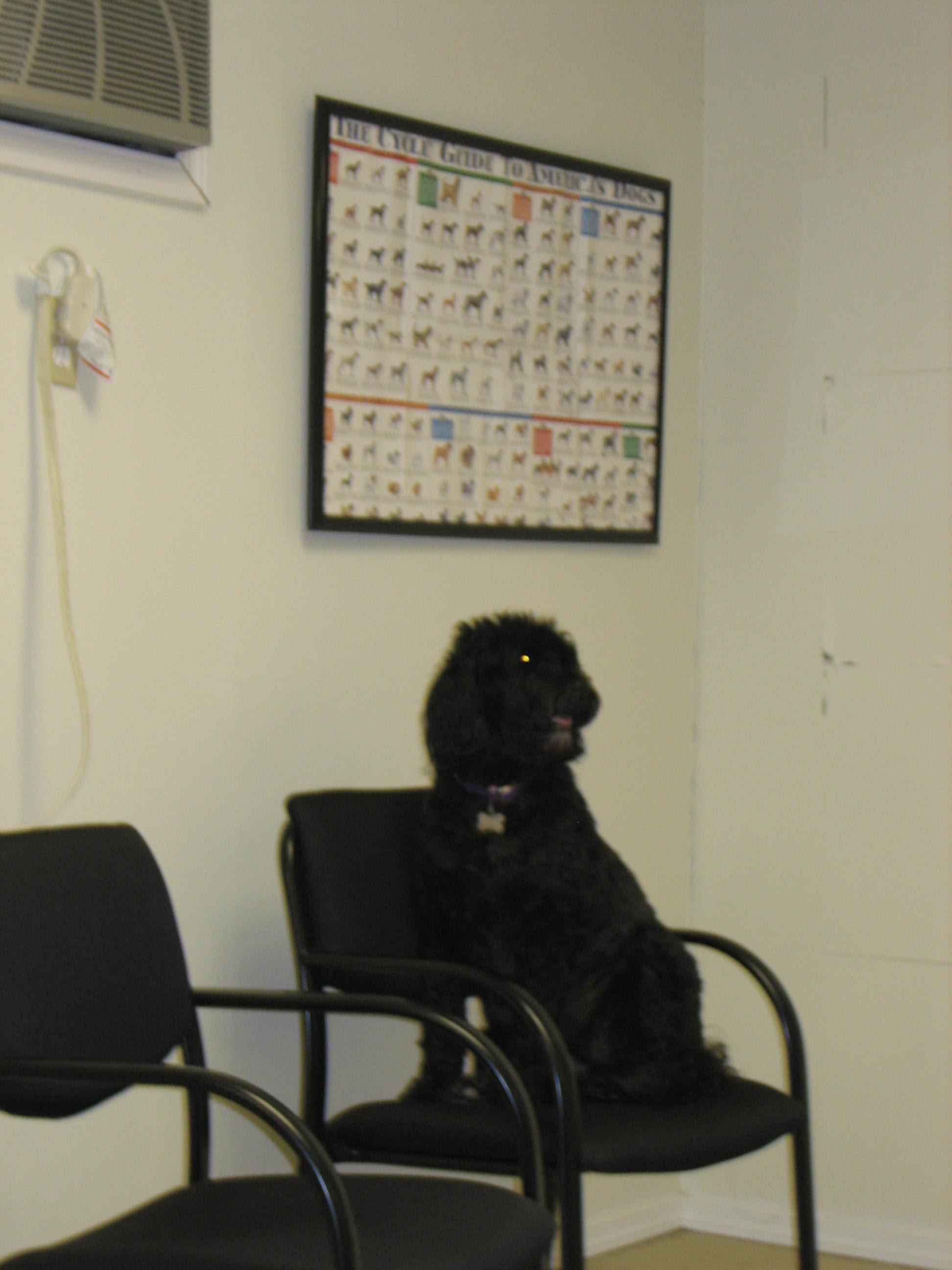 I have to add at this point that Lilly is a Portuguese water dog and a play fiend. Lara was also outside and within a few moments and some cursory sniffs they were off running and running and running and 1 hour later they were still running, bouncing and jumping. They both have a similar play style and just loved each other’s company.  When it was time to go in for a rest and then dinner Lilly ran straight into the crate where we had placed a toy frog, one of Lillie’s favorites, and Lara ran straight behind Lilies crate and lay down.  This was a new behavior and I was not sure what to make of it so I left them both in their places. Safety always comes first with The DogSmith, so even when dogs are great friends they are never left alone unsupervised and loose.

I came back in an hour to give Lilly her dinner and Lara was laying so close to the crate that they were actually touching through the sides. I gave them both dinner and left the room. I had only left Lara outside her crate once before and when I came back she had severed the blind cords of each of the window blinds so leaving her out was a risk. You may remember that first night when she got out of her crate, opened a door and then destroyed two floor mats, pulled a plant apart and chewed the bottom of the door frame. MMMmmmm, I did not have the heart to chase her down, pick her up and put her in the crate so I took the risk and left her where she was. I did check back every hour and she was happily snoozing against the side of the crate and Lilly was lying against the same side next to her.

That night I had to put Lara in her crate, leaving her out for a short period of time was ok but not for 8 hours.  That would not have been a wise decision.  For the two days Lilly was here it was very easy getting Lara in and out of the buildings. Lilly is happy to do as we ask and where Lilly went, Lara followed. On a training note I wanted to update you on how Lara’s crate training is going. Lara, once in her crate is fine, she relaxes lies down and will, without any fuss stay in her crate. To get her in the crate I had to pick her up and carry her over and then actually place her inside. If I placed her in front of the crate she would turn and slink off. Because Lara is so afraid of everything It has been my goal to not use any cohesion with her so just dragging her to the crate is not The DogSmith way. Because she is scared it is also not possible to lure or shape the behavior, she simply sits down and does not move. Anyway, each day, and on every occasion I have needed to put her in the crate, I have slowly positioned her a little farther back from the crate opening.  I am developing a reinforcement history with her going into the crate so this is how it goes.

Lara’s crate always has yummy treats in it, her toys or a chew bone. Every time she goes in there is a new surprise. One day I forgot to actually place her right inside the crate and when I put her down just her front feet were in the crate, I was expecting her to freeze or slink away but she actually took the two steps to go inside. Bingo. So now each time we go to her crate I place her on the floor just a little bit farther away pointing directly at the crate. We are now two feet away and she will take the few steps to go in. I am also attaching a cue ‘crate’ to her movement into the crate as I am hoping when we have developed some confidence and a stronger relationship I can train her using the same cue.

Lilly left to go home on Thursday. I was sad as Lara and Lilly had developed a nice relationship and I had seen Lara move about the property with a new spring in her step. Not wanting to lose any momentum I decided on Thursday morning to take Lara into our guest house and do my work from there so we could spend some time together. I moved my laptop over; a pot of coffee and off I went to get Lara.  Not sure if you remember but getting Lara outside has never been the problem, the problem has been getting her back inside. Anyway I carried Lara over to the house to avoid a lengthy effort getting her back inside. We had a nice morning together and when it was time to get her back outside she would not budge. With all doors open and even the use of my dogs she just would not leave the house. She lay in the corner by the bed looking very relaxed. As I went to pick her up she actually jumped on the bed and moved into the corner. To have moved her would have meant crossing over the bed and picking her up while both of us were on the bed. This did not seem a smart idea so I left her there.

I returned to get Lara a few hours later and as confirmation that she is housetrained there was no damage, no mess and when I opened the door she darted out to do her business, she then darted straight back inside again. It made me laugh but also surprised me as she loves to run around the yard and the training pasture.  Anyway, to cut a long story short Lara is now living in the guest house and is only going in her crate at night. This is a huge breakthrough as when we are inside the house she is so happy she appears to be a normal dog. She is now conditioned to the noise of her food bowl and will approach me happily. She spends her time playing with toys and relaxing. More importantly there has been no damage and she seems extremely happy. The caveat is that now I have to carry her outside rather than carry her in, when I want her to go out and play.  She readily runs outside when she needs the bathroom. I much prefer this as I don’t spend hours outside late at night trying to persuade her to come inside. Plus I want, no, make that ‘need’, her to be a good house dog as this is going to help her in her forever home.

Lara’s behavior outside is still on and off. Any change in the environment, noise, movement, or strange items sends her running. Only now it’s not into a bush but back to the comfort of her house.  I am also able to train her to some extent. We are still working on shaping a touch the hand and this has benefited me as when I need her to come to me I crouch down and she will approach to touch my hand. She even licks my hand and arm now and lots more wags.

On Saturday, yesterday, we had some friends here all day. They helped us shear our sheep and then stayed for lunch. Lara spent most of the day slinking around the garden maintaining a comfortable distance. When we decided to go out for supper last night I was not sure if I could as it would depend on how long it took to get Lara back inside. I walked over to the guest house, opened the door and before I could, turn Lara was in the house. This was another breakthrough as Lara never gets that close. When going through doors or gates you have to leave them wide open and give her a wide berth.  Lara stayed in the house during our dinner.  Here comes the cute part. When we got home I went to spend some time with Lara. I opened the door and she ran outside, did her business and ran back inside and jumped on to the bed. I got on the bed with her and fell asleep. Yes it was only 8 pm and I was tired. I woke up at 1am and she was tucked into me.  As I stroked her she lifted her head and licked my nose. I really wanted to go to my bed, brush my teeth and put on my night clothes but I also did not want to leave her. I decided to stay and we both slept until 8 am this morning. 8 am, I have not slept that much for that long in years. When I awoke Lara was staring at me her head tucked against my arm. She gave me a good morning face lick and we both got up. She followed me out of the house and into the garden where we were greeted by Rick and my dogs and off we went for our morning walk. We still have so far to go but what a wonderful weekend.