Cinnamon is a tiny little thing.  She’s 10.5 months old and around 17 pounds.  A lovely little red tri female who is rather timid but with a little love and time she’ll come around!

Cinnamon may never be a social butterfly but she will be a love to her owners!  She seems to be house and crate trained and fine with other dogs that give her space.  She has tried to play a bit but doesn’t really know how to at this point (we have no idea how she is with cats).

If you have the time and patience is all this sweet girl needs.  Due to her timidness a home with no small children to frighten her would be best. 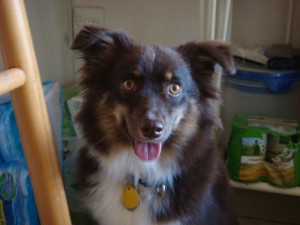 To meet her, fill out the application here.

Cinnamon is fostered in Oviedo, FL

Ralphie is one of the gentlest dogs anyone would find.  He is very laid back and affectionate and just melts when someone shows him attention.  Ralphie is very bonded to people and never met a stranger.  He is currently fostered with a 4 year old child and is very gentle with her as well.  Ralphie does well with other dogs, cats, and rides well in the car – though he will try to hug and kiss the driver.  He wants to be with his people always. Ralphie is quite simply a one in a million kind of dog.  While he visited the vet’s office a client picking up her dog was so impressed with Ralphie’s loving temperament after spending some time with him, she called New Spirit to tell us what a love of a dog he is.Ralphie is just that special.  He touches people wherever he goes.

Shortly after rescue, Ralphie’s foster home discovered a large mass on his rear leg that tested positive for a low grade spindle cell sarcoma.   The tumor has been removed and if the margins of the mass show no presence of cancer, then it is highly likely that all of the cancer has been removed.  However, as with any cancer, there is always the chance that it could recur at some point in Ralphie’s life.  Ralphie also has an old injury in his front limb that causes him to limp.  He is currently being maintained on pain medication and supplements to help him become stronger. 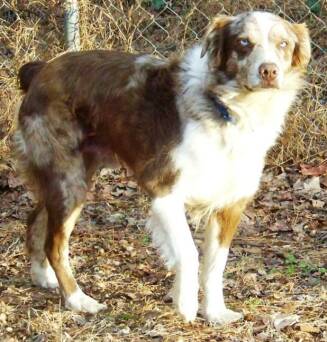 We understand that adopting Ralphie could hold a greater financial investment for his family in the future.  However anyone spending time with him would agree that he is well worth the investment.