Get In The Groove – Understand How Dogs Learn and Wow Will Learning Take Place!

Opening a dog training business is easy because the industry is unregulated; becoming a dog training professional is more difficult. A true professional should have integrity, abide by a code of ethics and have an academic background in operant and respondent conditioning to support good dog training mechanical skills if they are to positively impact the lives of people and their dogs. Professional dog trainers must understand how dogs learn, if we understand how dogs learn then we can not only teach then new behaviors, we can also modify unwanted behaviors.

How dogs learn and unlearn behaviors is critical knowledge for today’s dog trainers and behavior analysts. If we are to save canine lives, help families retain their pet dogs and create harmony between canine and human them a strong understanding of how does learn is a must. Pet dog owners with problems need then solved and solved quickly.

How Dogs Learn and Unlearn Behaviors

Natural selection helps species adapt to change across generations but does not help living beings cope with fast environmental change. When individuals need to modify their behavior to adapt to new and changing environments they must learn.   Learning indicates a change in behavior and takes place through experience to events, i.e. stimulus.  Learning is essential for survival. Chance (2008 p 24) states “learning takes up where reflexes, modal action patterns and general behavior leave off”.

I believe that   dogs learn in two key ways, task-conscious or acquisition learning.

Acquisition learning is seen as going on all the time. It is 'concrete’, immediate and confined to a specific activity; it is not concerned with general principles (Rogers 2003: 18). Examples include much of the learning involved in and around the home.  Some have referred to this kind of learning as unconscious or implicit. Rogers (2003: 21), however, suggests that it might be better to speak of it as having a consciousness of the task. In other words the learner may not be conscious of learning; I equate this to respondent conditioning. The second form of learning is learning-conscious or formalized learning such as takes place in the training class environment. Formalized learning arises from the process of facilitating learning. It is 'educative learning' rather than the accumulation of experience. To this extent there is a consciousness of learning - subjects are aware that the task they are engaged in entail learning. 'Learning itself is the task. What formalized learning does is to make learning more conscious in order to enhance it' (Rogers 2003: 27). It involves guided episodes of learning.  In dog training we consider this to be how we apply the protocols of operant conditioning.

So What is Operant Conditioning 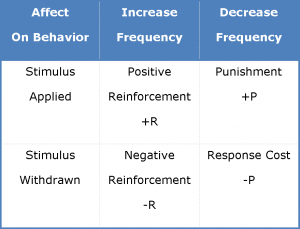 As behavior is the function of its consequences and whereas reinforcement strengthens the likelihood of a behavior then punishments reduce the strength of the behavior. Punishers are aversives and something a subject works to avoid. When an aversive event is added to a situation then positive punishment has taken place. Negative punishment subtracts something from the situation, like privileges, and is sometimes called penalty training.  Experiences must have three characteristics to qualify as punishment. First, the behavior must have a consequence, second the behavior must decrease in strength and finally the reduction in strength must be a result of the consequence (Chance 2008).

Respondent conditioning techniques for changing behavior focus on the antecedents in the operant scheme, the stimuli, setting events and motivating operations that contribute to or elicit the problematic conditioned emotional responses and the operants they motivate.  Respondent conditioning techniques and procedures used for changing behavior are a combination of, a) in vivo systematic desensitization where the animal is systematically and gradually exposed to the problem stimulus while maintaining the animal below the conditioned emotional response threshold, b) counter conditioning a type of exposure therapy where the problematic conditioned emotional response is replaced with a more desirable or appropriate response and c) attention exercises that promote relaxation by redirecting the animal’s focus (O’Heare 2009).