Do Humans Have an Inborn Understanding of Dogs?

According to a recent study conducted at Eotvos Lorand University in Budapest, our human ability to understand dogs probably peaks at around 10 years of age.

By age 10, children seem to develop a natural talent for decoding dog barks. 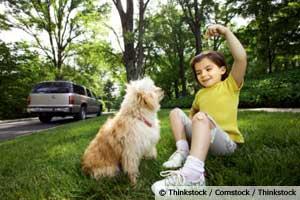 The study, published in the journal Applied Animal Behaviour Science, involved children aged 6, 8 and 10 years, and adults who listened to different types of recorded dog barks.

The barks were separated into three general categories:

Study participants had to match the barks to three types of human facial expressions, including fearful/lonely, angry and playful.

All of the kids and adults had no trouble picking out angry barks. But of the three groups of children, only the 10 year-olds were able to correctly distinguish the other types of barks. Their ability to understand each type of bark was about the same as that of the adult listeners.

"This shows that the ability of understanding basic inner states of dogs on the basis of acoustic signals is present in humans from a very young age. These results are in sharp contrast with other reports in the literature which showed that young children tend to misinterpret canine visual signals."

Jennifer Viegas of Discovery News thinks the study supports the theory of a universal animal language – a primitive method of communicating basic emotions that may unite virtually all mammals.

A few years ago, study author Pongracz and colleagues took a look at how well people were able to distinguish five different canine emotional states based on the barks of a Mudi, which is a Hungarian herding dog. The five states were aggressiveness, despair, fear, happiness and playfulness.

The researchers concluded changes in tone, pitch, and elapsed time between barks determined how study participants categorized the emotional states behind the barks.

High-pitched barks with longer intervals between barks were perceived as less aggressive than faster, lower-pitched barks.

"This relationship could have formed the basis of an evolutionary ritualization process whereby low pitched vocalizations tended to signal aggression because larger animals are more likely to win contests...and high pitched vocalizations became predictors of submission or friendly intent."

Study participants also associated certain barks with the emotions of despair, happiness and playfulness. This seems to indicate humans and canines might have the ability to communicate at a higher level than the universal mammal language.

Scientists think so many years of domestication have enhanced dogs' ability to communicate with us, and not only through barks, but also through visual cues like changes in expression.

Our Special Bond with Dogs

The idea that humans have an innate ability to understand dog barks should probably come as no surprise.

After all, wolves and dogs have figured prominently in the lives of men, women and children since the Stone Age.

These same study authors also recently tested the ability of people who were born blind to understand the meaning of dog barks. They wanted to use people without sight because they have no visual memory of barking dogs to interfere with what they hear.

It was concluded the blind can also pick up on the general mood or inner state of dogs based on their barks, which certainly supports the theory that humans are born with the ability to some extent.

When you think about it, this makes all kinds of sense.

Animals in the wild listen for the sounds of other animals as a matter of survival – usually for purposes of eluding predators and other dangerous interlopers, or catching prey.

Humans are animals, after all – and we haven't always lived safely tucked away from other animals.

According to researcher Nicholas Nicastro of Cornell University, our feline companions also appear to have evolved in terms of their ability to communicate with us.

But according to Nicastro, the goal of kitties is to manipulate their humans! "Though they lack language, cats have become very skilled at managing humans to get what they want — basically food, shelter and a little human affection," said Nicastro.

I think most of us who are owned by cats can agree communicating with a feline member of the household is a whole different ballgame from exchanging information with the family dog!

Dr. Dennis Turner of the University of Zurich and a leading expert on the feline-human bond, describes the results of his research this way:

"What we found was the more the owner complies with the cats wishes to interact, the more the cat complies with the owners wishes, at other times. They go up together, or they go down together. If the person doesn't comply with the cat's wish to interact then the cat doesn't comply with the person's wishes. It's a fantastic give and take partnership. It's a true social relationship between owners and cats."