Colon cancer and 6 other surprising things dogs can sniff out

Everybody knows that trained doges can sniff out drugs. But inmates with concealed cellphones and anyone with pirated CDs should be wary of these dogs, as well 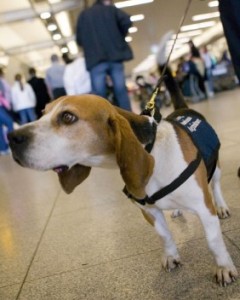 This week, Japanese researchers reported that a specially trained Labrador has been able to detect colon cancer with up to 98 percent accuracy by sniffing patients' breath and stools. This is only the latest example of how humans can employ dogs' remarkable sense of smell for practical, or even life-saving, use. Here are six other instances:

1. Bladder cancer
It's no secret that many a mutt loves to sniff urine, but that odd propensity can be put to good use. In 2004, British researchers found dogs had a "remarkable" ability to detect bladder cancer in patients by smelling their urine. (Watch a report about dogs detecting cancer)

2. Ovarian cancer
In 2008, Swedish researchers trained dogs to sniff out another kind of malignancy, after learning that ovarian cancer emitted a unique smell. "There is great value in this study," said Integrative Cancer Therapies' editor-in-chief, Dr. Keith Block.

3. Pirated DVDs
In 2007, two black Labradors named Flo and Jackson received outstanding service medals from the Malaysian government for their work sniffing out pirated DVDs. Their notable noses, trained to identify the scent of certain chemicals, led to 26 arrests and the seizure of $6 million in illegal DVDs.

4. Bedbugs
The nastiness of bedbugs is only underlined by the endearing Puggles (among other breeds) who are on the front line in the war against the vexing pests. These dogs are "stunningly accurate," with University of Florida researchers reporting that a well-trained dog can find a single bug or egg with 96 percent accuracy.

5. Cellphones in prison
Smuggled cellphones are a growing problem for America's prisons, especially when inmates use them to run illegal businesses or plan crimes from the inside. Fortunately, the phones' batteries have a unique smell that skilled dogs can detect, even when sneaky prisoners have gone so far as to hide their handsets in jars of peanut butter.

6. Animal droppings that inform wildlife studies
According to a recent New York Times report, wildlife researchers, who use the location of animal droppings to estimate wildlife populations, are increasingly using scat-sniffing dogs to help them collect data. The dogs are capable of "scoping out" such droppings from distances as great as 33 feet away with 75 percent accuracy — compared to their human counterparts, who can only see the poop from a distance of three to five feet.