Can you Walk Your Dog? – Teach a ‘walk nicely’ training methods your children can use! 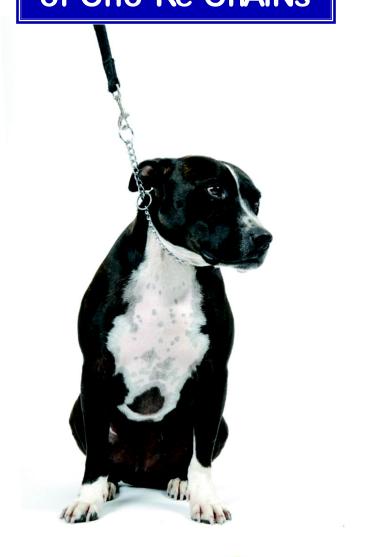 Take the 'choke' out of walking your dog?

I have been thinking lately about the practice of using choke collars and jerking the lead as a “correction” that many people still use when training and handling their dog.  The most common ‘use’ of the ‘jerk’ correction I have noticed is when a dog owner wants their dog to ‘heel’.  Over the years, I have witnessed many dog handlers telling their dog ‘heel’ as they have issued a big leash correction.  And usually the result of this ‘correction’ is frustrating to the dog owner as the dog pulls even harder against the leash.  ‘Heel’ is supposed to be the cue for walk in the appropriate place.

Think about it.  If you were constantly jerked, pulled or tugged when you were next to, slightly in front of, or behind your owner, would you choose to be in a ‘heel’ position or would you forge ahead or fall behind to escape or evade any future corrections. If I had experienced a correction like that while hearing the cue ‘heel’ I would also want to head for the hills when I heard that word.

Inadvertently sometimes the ‘heel’ cue becomes a warning signal to the dog that a correction is coming and thus the cue evokes a   ‘move away behavior’ from the owner.   It is far more pleasant and effective for a dog to learn appropriate leash manners when they are taught where to walk nicely in relation to their walking partner rather than being corrected for getting it wrong.

If the dog is reinforced for correct placement and pace then they will no longer forge ahead or lag behind. A dog training ‘cue’ should be music to the ears of a dog.  A dog who has been trained using effective, efficient and pleasant methods will happily respond to a ‘cue’ and training your dog  will be a more pleasant experience for all. So let’s take the ‘choke’ out of training and replace it with clear concise instructions that builds your dog’s behavior repertoire, sets your dog up for success and rewards them when they get it right. This is a far more pleasant situation for both owner and dog. In addition to being an ineffective training method, there are real health concerns when a dog’s head is jerked around.

Karen Overall (MA, VMD, PhD, DACVB, Clinical Behavioral Medicine for small Animals) says “In a retrospective study on spinal pain, injury or changes in dogs conducted in Sweden, Hallgreen (1992) found that 91% of dogs with cervical anomalies experienced harsh jerks on a leash or had a long history of pulling on the lead. The use of choke collars was also over represented in this group. This strongly suggests that leash corrections are potentially injurious”

Robin Walker (BVetMed MRCVs) says "In 30 years of practice (including 22 as a veterinary advisor to a police dog section) I have seen numerous severely sprained necks, cases of fainting, transient foreleg paralysis and hind leg ataxia after robust use of the choke chain. In the 1970’s, when the practice of slamming the dog sideways with a jerk that brought the foreparts clear off the ground and two or three feet towards the handler became popular, the resulting painful condition was known as "Woodhouse neck" in this practice. Some of these cases exhibited misalignment of cervical vertebrae on radiographs. It suggested that an existing spondylopathy renders these dogs more vulnerable to injury. My ophthalmology colleagues have decided views on the relation between compression of the neck, intraocular pressure disturbances and damage to the cervical sympathetic nerve chain resulting in Horner's syndrome.  I personally have seen a case of swollen eyes with petechial scleral haemorrhage and a number of temporarily voiceless dogs."

To learn the steps and mechanics of teaching your dog to ‘walk nicely’ or to ‘heel,’ contact your local DogSmith. Your local DogSmith will take you through the stages of a) teaching your dog to stand while on a leash without pulling and lunging, b) teaching you the ‘walk nicely’ behavior in steps so you build on a solid foundation, and c) of introducing you to some great management tools to use while you teach your dog new and acceptable behaviors allowing you to walk and exercise your dog without reinforcing the old and unacceptable behaviors. 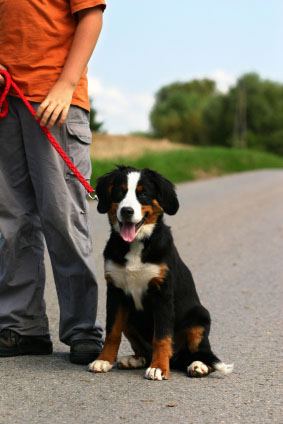