Bartonellosis: An Emerging Disease You Should Know About (Cat Scratch Disease)

Bartonellosis, also known as the ‘cat scratch disease,’ is currently under study to better understand its potential to damage the health of both humans and animals. 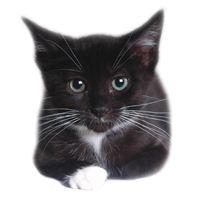 Among the new findings about the Bartonella bacteria:

"Going from not knowing a genus of bacteria existed in the 90s to now realizing that cats, dogs, cows, deer, squirrels, voles, moles and kangaroos in Australia are all running around with their own Bartonella species in their blood changes the dynamics of the human-animal bond.

And it creates some caution that we didn't have to worry about five years or 10 years ago when we didn't know this information."

Dr. Breitschwerdt wants veterinarians, their staffs, and others who regularly handle animals to increase their awareness of the health risks of Bartonella bacteria – especially since most physicians are unaware of the latest findings.

Bartonellosis can be as debilitating and difficult to diagnose as Lyme disease, and has in fact been misdiagnosed as Lyme disease by some physicians.

Until scientists began their most recent research on the Bartonella bacteria, it was assumed when the disease was identified in 1992 that it was transmitted primarily by the scratches and bites of cats contaminated with flea feces.

New research is uncovering a much broader array of both vectors (carriers) and hosts for the bacteria. In fact, no other infectious agent is transmitted by more vectors.

Currently, the following insects are known to be capable of transmitting certain species of the Bartonella bacteria:

It is suspected many other flea species can also be transmitters, as well as both the biting flies and wingless flies (known as 'keds') that feed on cattle, deer, elk and sheep.

It also appears likely ticks can transmit species of Bartonella, in particular the common Ixodes species of ticks.

A list of known hosts of Bartonella bacteria includes:

Interestingly, many of the symptoms of the disease are the same for both people and dogs. Unfortunately, many Bartonellosis symptoms are also seen in a wide variety of more common and better understood diseases. This makes accurate diagnosis of Bartonellosis less likely.

The first dog Dr. Breitschwerdt (DVM at North Carolina State) tested that was positive for Bartonellosis was a three year-old Labrador retriever.

The dog had been on a year-long course of increasing doses of immunosuppressant drugs due to misdiagnosis of the disease. During that year, the lab went on to develop Bartonella-related seizures, arthritis, vasculitis (inflammation of the blood vessels), epistaxis (nose bleeds), and aortic and mitral valve endocarditis.

Similar situations have been documented with human patients at the Mayo Clinic and Duke University Medical Center. Misdiagnosis and subsequent treatment with immunosuppressant drugs resulted in development of Bartonellosis-related endocarditis. (Endocarditis is inflammation of the heart's inner lining, usually also involving the heart valves.)

In fact, about 80 percent of people and the same percentage of dogs with Bartonellosis develop endocarditis selectively involving the aortic valve.

Dr. Breitschwerdt also suggests that doctors should check for Bartonellosis as a potential cause of unexplained nosebleeds in children.

Bartonella infection is proving extremely difficult to diagnose in many situations.

The bacteria is able to hide in endothelial tissues (tissues composed of the endothelial cells that line the entire circulatory system), thus the description of it as a 'stealth' pathogen. Dr. Wendy Walker's story is just one of many harrowing tales of missed diagnoses and years of suffering with chronic, debilitating disease.

When the disease was discovered in 1992, only two species of bacteria were known. Today, 26 have been identified.

The usual tests to detect infection -- including cultures, bacterial DNA tests, and antibody testing – don't pick up every incidence of infection. Dr. Breitschwerdt's laboratory has developed a special test which, when combined with other tests, is more effective at detecting the presence of different Bartonella bacteria species.

The current treatment protocol for both humans and dogs is a six-month course of antibiotics.

According to Dr. Bobak Robert Mozayeni, a physician and leading expert on Bartonella who practices in Rockville, MD, 95 percent of patients uniformly respond to treatment, without damage to kidneys or the liver according to results of monthly lab work he runs.

Dr. Moyazeni is uncertain about the potential for relapse: "In dogs, there is a 15 percent relapse rate even after six months of treatment, but we need to do formal studies to answer these questions (on the human side)," he says. "But because it's so new, it's hard to get anyone's attention."

What You Should Keep in Mind about This Emerging Disease

"I think both the bacteria and the diseases that these bacteria cause are very much under-appreciated. During the past few years, I certainly have invested a fair amount of my life trying to convince people that there is a problem.

I also realize that it takes a lot of medically relevant information from a lot of laboratories and research centers before our medical infrastructure sits up and takes notice of a potentially important cause of chronic disease."