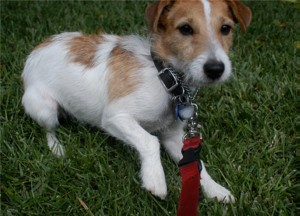 AVSAB’s position is that punishment1 (e.g. choke chains, pinch collars, and electronic collars) should not be used as a first-line or early-use treatment for behavior problems. This is due to the potential adverse effects which include but are not limited to: inhibition of learning, increased fear-related and aggressive behaviors, and injury to animals and people interacting with animals.2?

AVSAB recommends that training should focus on reinforcing desired behaviors, removing the reinforcer for inappropriate behaviors, and addressing the emotional state and environmental conditions driving the undesirable behavior. This approach promotes a better understanding of the pet’s behavior and better awareness of how humans may have inadvertently contributed to the development of the undesirable behavior.

The complete position statement of the AVSAB can be found here. Read an article by Niki Tudge, DogSmith Founder on How is the decision made when training dogs to use aversive training methods?

How Do Professional Dog Trainers and Behavior Counselors determine which training and behavior interventions to use and when is the application of aversives in training pet dogs justified?

When developing training programs or behavior change interventions the professional needs to decide if they are adding to the animal’s behavior repertoire, training a new behavior or reducing the strength of an existing problematic behavior.  When choosing an intervention or a training program, the risks and benefits must be considered particularly when taking into consideration whether to use aversive stimulation. Intrusiveness is on a continuum and the professional, having completed a function assessment and developed a contingency statement, should proceed forwards using the least intrusive procedure available to them from a recognized behavior change strategy (O’Heare p 10 2009).

The companion animal professional should start their intervention at the lowest level of “the least intrusive effective behavior intervention algorithm and levels of intrusiveness table” (LIEBI). If the least intrusive behavior change program is unsuccessful the professional trainer needs to reconsider and revaluate the components used to determine the contingency statement and then make the necessary adjustments to the behavior change program.

If the professional has continued failure in achieving the behavior plan goals using the intervention then before considering an increase in the intrusiveness of the intervention it would be wise to obtain another perspective on the problem from a more qualified professional and either work under their supervision or consider referring the case to them. The professional trainer can also decide at this point to move to level 2 or level 3 on the LIEBI model as both of these levels are considered minimally intrusive (O’Heare p 14 2009).

If the behavior change program is still not effective and the companion animal professional is considering more intrusive interventions a decision should not be made prior to or without considering if the client needs to explore psychopharmacological solutions. The professional also needs to, in concert with the animal’s owner, consider if the behavior is an unacceptable safety risk or is unmanageable. It may be necessary, based on these factors, to make a decision on whether the environment can be manipulated through antecedent control measures to “mitigate the effect of the problem behavior” (O’Heare p 15 2009).

The professional should consistently be looking at the risks and benefits prior to making any decisions particularly as they move further along the algorithm. The decision to make use of more intrusive interventions is weighed against doing the least harm and the animal’s dignity. The decision to increase the intrusiveness of the intervention needs to be well thought through and justified. Could the consequences of a failed behavior change program be more aversive to the animal then a behavior change program with a more intrusive intervention?  If a companion animal professional  is considering using an aversive behavior change program they need to decide if they are competent enough to ethically carry it out and if not, they  should decide between referring the case or working on the case under the supervision of  a more competent professional (O’Heare p 14 2009).